Why We Buy, The Science Of Shopping Paco Underhill
Simon & Schuster Paperbacks, 2009, 306 pgs 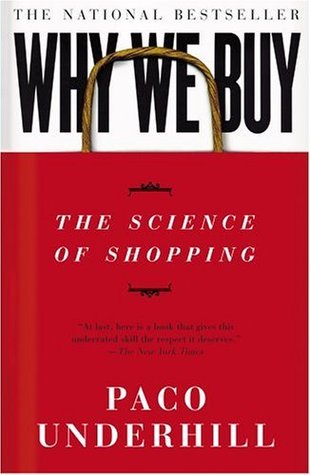 This book should be called “How we buy, how I observed people shopping”.  As I got to the end and the pages remaining on the right side of the book were thinning out, I realized, Underhill didn’t answer why we buy.

But that’s okay, this book was ‘alright’, like a lukewarm glass of water. It didn’t break any ground, didn’t revolution retail, was a little sketchy on the ‘science’ side of things. But I couldn’t shake the fact that I was reading a book that was just a big advertisement.

The meat of this book, where he attempts to answer the question on the cover is formulaic. Underhill & Co go to a retailer, like the team of crack investigators on Criminal Minds, set up their tracking equipment and figure out how to make the store better.  They watch through cameras and assistants will follow shoppers around the store and track what they do, what they look at, what they touch, how long they spend in a particular area, etc.

Underhill doesn’t deny this, 90% of the improvements are common sense, usually very obvious, but somehow fell between the seats. His tenure in the business also gave him a strong veneer of arrogance. He goes to the store, like a humanitarian worker goes to a disaster ravaged zone,  it could be big box USA or humble operations main street Maine. He and his team set up in store, he observes for a bit, suggest something to the owners, they change it, then ka-ching! The cash registers break because they have so many sales! Repeat this for about 100 pages.

There are times when the ignorami with their expensive MBAs from Gudger College defy Underhill and don’t implement his suggestions. Underhill goes onto the suggest that they’ve probably forgone a fortune in sales because of their inability to listen to Paco.   I feel Underhill isn’t very charitable to the calculus that goes into business decisions, maybe the theoretical business theories prevent them from implementing ‘common sense’ suggestions, or maybe there were practical reasons to why his suggestions went unused.

Underhill did bring up some interesting observations throughout his book, for instance Underhill has noticed shoppers treat the front end of the store as a landing strip. Shoppers want to exit the parking lot as quick as possible, they are moving with purpose and pace to get inside, things too close to the front doors will go unnoticed.  Move up the store directory a little bit past the front doors and shoppers will notice and use the directory.

Shelf placement was important too, sales in a cream that seniors bought went up dramatically once they were relocated from the bottom shelf, to eye level.  Seniors no longer had to get down on their hands and knees to grab it.   Underhill also suggested placing products that appeal to children lower down so children could grab them and put them in the cart, a suggestion I felt a little uneasy about. 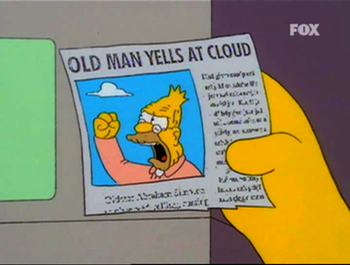 Paco Underhill yells at the internet!

Where the book really started to come off the rails was the end.  Underhill wrote an unintentionally hilarious chapter on the “internet”, which basically amounted to an old man yelling about hippies dodging the draft. In the original 1998 publication of this book he wrote that the internet was a fad and nothing more, much like the deliciously ironic article that Newsweek ran about the internet in 1995 (Why the Web Won’t be Nirvana by Clifford Stoll, accessed via internet).

But here’s the thing, Underhill had an opportunity in the 2009 reprint to walk back his earlier criticisms, except he decided to level a new torrent of strange criticisms.  He doesn’t repeat the same mistakes of the original 1998 book, but he still seemingly doesn’t understand the internet. Here is a good example: his colleague told him about a musical outfit called the Balkan Beat Box, sure enough, he found them on iTunes and he bought a few of their tracks for 90 cents a piece.  He later complained that that perhaps iTunes could offer limited play options (10 cents for 5 plays or something like that), instead of a limited 30-second preview.  I’m listening to the Balkan Beat Box right now, off of Youtube for the modest price of $0.

I must confess that I found that nearly every suggestion that Underhill had for the internet was for commercial purposes.  Underhill writes that perhaps musical groups could arrange virtual custom playing for an audience. He also suggests that there is a deficit of expert advice, there is no balding man to come around the counter to tell you all about the riding lawn mower you want to buy. Underhill suggests a “hire an expert” service, which undoubtedly exists with the endless confines of the internet.

But here is the thing, despite Underhill complaining about the decentralized unfiltered aspect of the internet, the unfiltered decentralized aspect of the internet is actually a strength.  You can find a treasure trove of information on products, basically, anything you like.  Too much information? Learn what sites to trust for information and follow their metrics, no need to hire experts, plenty of reviewers on sites and Youtube will review products, and do it free of charge.  Have a specific question?  Most pages that sell the items have a section where customers can ask questions, no good? You can utilize forums and social media to ask questions and get answers.

Underhill complains that retailers aren’t doing enough on the information front, online retail rectifies this problem in a much better way than the retail world could.

I’ll offer a personal anecdote as evidence of what I mean.  I recently got a dashcam, here is how the internet made the whole process better:  first, dashcams are somewhat exotic, nothing I will find at Walmart, but I might spy one or two models at a Bestbuy, the internet has nearly an infinite amount of dashcams.  Second, if I were at Best Buy, I wouldn’t be privy to how the final footage would look, I would only be able to glean a handful of information from the box.  There is a wealth of information on the internet, I even found a reviewer who dissected parts of the dashcam. While I didn’t really need to see that, the type of information on the internet for a product is equivalent to the information in a standard municipal library. Standing in the aisle at Best Buy, the information available is limited like one of those slips you find on the ground, inviting you to “Whacky Wednesday, ladies get half off on drinks”.

Maybe the internet in 2008 wasn’t as great as it is now, but it wasn’t exactly a Siberian backwater, so I’m not sure why Underhill is so lost on this topic.   The biggest disappointment regarding this chapter was that he could’ve used it to talk in-depth about the bricks & mortar versus the virtual domain. He could talk about Amazon versus entrenched Walmart.  He could about how bricks and mortar have failed to capture and compete with online.  Did you know Walmart.com has been a thing since at least 2000, Underhill could’ve talked about how the world’s largest retailer fumbled the ball trying to make it in the virtual world, but instead Underhill just rambles about teenagers on his lawn.

The chapter after is even more so regrettable, a whole chapter about how Paco-san grew Envirosell internationally.  Yes, he went into detail about finding partners abroad and setting up their operations, no great details on the clients, or how their work differed abroad.  Why Underhill included this chapter is beyond me, it does not advance the spirit of the book at all and left me with the feeling that this book was indeed an ad.  All I could glean from that chapter was that he was growing internationally and if you are a retailer looking for a consultant, you should call up Paco Underhill.

I give this book a 6 out of ten.  While he does provide interesting tidbits about the retail world, he doesn’t go into great depth.  He declares what he does is part science, but he doesn’t share a lot of the data he collects (perhaps forbidden via contract with his clients). The book has zero endnotes, showing the lack of outside research.  The book is one giant recollection of observations, so I wouldn’t really look at his work as a contribution to science, even if  you want to call “the science of shopping” a thing.