Most people love summer, especially in North America.  It represents the polar opposite of winter: gone are the short days, the bone chilling winds,instead replaced by basking radiant solar beams that feell so hot that I feel my protein being denatured. I stand outside, sweat usually manifests itself quite quickly on my brow, I squint up at the unrelenting source of thermal overload and have concluded the sun is already turning into a Red Giant and will soon gobble up Mercury, Venus and eventfully Earth, much like the sun has gobbled up my comfort.

Summer can be just as harsh as winter, but we idolize summer. Perhaps one reason summer is so fondly considered by many is the ever-enduring bond that many of us feel about summer while growing up: the ultimate prize, months away from school.  The unfettered days of idealistic freedom, and while I’m sure many people have different memories of summer, I recall quite a bit long bouts of boredom.  Summer is the prize, it is what students look forward to all year, but when the moment comes, when days blur into weeks, weeks into month, sometimes it doesn’t live up to expectations.

Or perhaps, people like summer so much because it’s not a frozen wasteland.

This digression is just a ridiculous segue into the my main point, tourist season seems to ruin places for me.

Take my recent stop over at the foot of an impressive piece of infrastructure: The Mackinac Bridge.  This bridge is impressive, by some measure it’s the longest in the Western hemisphere.  Like a wayward moth being attracted to lights, I find myself attracted to bridges.  My 8 readers may be surprised to hear this, but I like to spend lots of time near bridges.  I often bring a cigar and walk around near the bridge.  I often have important internal dialogues near bridges, bridges are my muse, and while I don’t have three hours to spare when I find myself crossing the Mackinac Bridge, I like to spend 20 minutes or so having an internal dialogue.  But, with tourist season in full swing, it is impossible to do this, the magic of pacing back and forth and thinking about whatever I think about, is gone, replaced with a stinging annoyance at all the people.

But how can I be mad at these people?  They have all recognized the sublime mystique of the bridge and like myself have found times in their “busy” schedules to spend time at the bridge.  I see an uninteresting array of people when I go in the summer.  I see a parking lot full of campers, trucks, canoes.  I see Michigan plates, Illinois plates, Texas, maybe I was the only Ontario plate at the place, who knows, probably not.  I’m not entitled to these majestic views, but the easiest way to get around this, go off season.

I think the first time I stopped at the bridge it was in winter or late fall, a gnawing wind that bit at my ears, a flashover of brisk wind coming off the straits. But that was okay, I was the only person at the bridge head, just pacing around.  One time I stopped and it was dark.  No one else was around.  I can only remember the interesting visual effect of all the red lights reflecting off the water under the bridge. My shitty cellphone camera didn’t give it justice, but it was quite the interesting experience.  The air was cool, and for a couple kilometers you could see the red caution lights a fixed to the side of the bridge, relatively low to the water and you could see the red light reflected in the water.

if my anecdotal story didn’t get my point across, it’s simple.  If tourist annoy you, go off season. 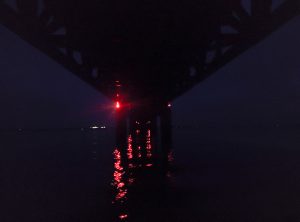