I always wanted a magnetic stirrer, and despite my grade B mental gymnastics, I could not con myself into spending $100+ on one.  What was I ever going to do with one, stir my rum and cokes?

Alas, as I discussed in a previous post I started a vape lab.  Well I had a real reason to get one, but I was constantly getting sick at seeing the price.  It went like this,

It was a bad cycle. But then I saw a DIY video. It seemed so damn simple, you just clink some wires together with some magnets and call it a day. How hard can it be?……

And it was easy as hell.  I went into my local surplus store and I bought some electrical junk without any idea what I was doing and a few hours later I built a prototype. 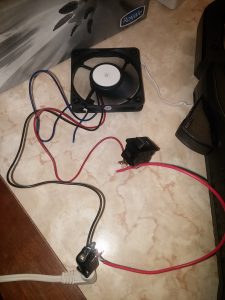 Pictured is my first functional prototype. I bought a random DC adapter for like $3, I was so naive I bought a 9V one when I really should have got a 12V one. I got the switch and the DC jack from a circuit board I sniped for $0.99. I desoldered those components clinked some wires together and when I turned the switch the fan roared to life.  I think I was more excited about my very simple DC circuit working than getting my University degree.   Interesting sidenote, when I metered my circuit it was pumping in 15VDC, I have no idea why, when the adapter is rated for 9DC.

Anyway, as you can see, that dinky fan was so dinky it wouldn’t work with two rare earth magnets on it. I played with it, and got it to work kinda.  Truth was, it was weak.

So I bought a 120 mm case fan for a computer. I clinked some wires together and bought a wooden box that has a glass front on the top and I called it a day.  Like a Greek Tragedy I lost my 9 VDC adapter. But in the litany of junk in my shed I found an adjustable DC adapter, that does anywhere from 12VDC to 3VDC.  This thing only works on 12VDC or 9VDC so not much choice.

It was easy to get the circuit working, it was a pain in the ass to get it to work efficiently.

So here I am, I have the 120 mm fan, wired up with a switch and a DC jack.  I used some electrical tape to tape the magnets to the front of the PC fan to prototype it.  Well, turns out, because all the coils and copper inside a motor, the magnets just wrecked havoc on it.  So I bought some double sided mounting tape from the dollar store and started mounting my magnets on that.  Not only was it more secure, but it gave some height off the main deck.

So anyways, the magnets I bought came with a small circular metal disc, bonus! I mounted that on to the fan, with double sided mounting tape and then I mounted my magnets on that! now my magnets were significantly higher than the main fan deck and it was closer to the surface I would be putting my materials on.  You can see what I mean in the picture below. 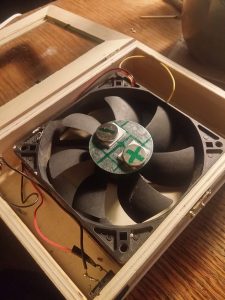 Stir bars were the biggest ache I’ve ever had.  So if you haven’t caught onto how these things work, you have two magnets (with opposite polarities facing up, remember

opposites attract) and when they spin they will turn something magnetic above it. So you have a stir bar in your solution and as your motor spins the magnets, it will spin the stir bar, which stirs your solution.  Well, turns out stir bars are a little more sophisticated than wires and motors. They are magnets encased in plastic/rubber material.  I was able to procure the nice strong rare earth magnets, but I needed a magnet that was equivalent to pistols on the magnetic-strength scale, not a damn Stinger anti-aircraft missile. It seems now in 2016 (Maybe due to political correctness), that you can’t buy weak magnets anymore.  Crappy tire didn’t have them, hardware store down the block didn’t have them, and I couldn’t find any at the dollarstore.  And then what? how do I get them in nice plastic? Do I use heat shrink tubes on them?  No, you just buy some real stir bars.

And here is the biggest advice I can give.
IF you want to make a magnetic stirrer, buy your stir bars right now.  There is nothing more agonizing in the world than having a built stirrer ready, but you can’t stir anything because of missing stir bars.  You can experiment like I did, with paper clips and stuff, but nothing works as nice as the actual stir bars. And if you want cheap stir bars from China, better get out your bikini because it will be next summer by the time you get them.  I bought a cheap stir bar on Amazon, and where the hell is it? I ordered it like a month ago.  Why did I do that? I went on Ebay and found a Canadian Vendor that had stir bars, got them in a week.  FYI, I’m still waiting on my China stir bar.

The video above shows it working.  This video was using my own stir bar, maybe if I feel up to it I’ll make a new video with my actual stir bars.  Stirs quite nice now.

One thought on “Home Made Magnetic Stirrer”