Steam punk/industrial style is pretty cool right?  Too bad that most artisan people selling their creations are selling them for hundreds of dollars, I saw one grand ceiling lamp set going for over a thousand.  That’s right, over a thousand dollars.   But here is the secret that no one wants you to know (lol), most steam-punk stuff is super easy to make.  Take me for instance, I wanted to build a steam-punk lamp, I wanted to make it out of pipe and an olde Edison bulb.  Sounded hard, but was totes easy.   And when I say it’s easy, I mean it’s easy.  My handyman skills leave much to be desired,  I take general offense to the “imperial” units of measurement,  and I only know how to sling a few basic tools.  So you must imagine how funny it would be to see me in the aisle at a store like home depot staring at pipe.  But 30 minutes later I walked out with a cart full of pipe and when I got home I clinked together a lamp in about 10 minutes.  So easy.

So what do you need?
If you have a pipe threader you’re set.  You can buy big a length of pipe (as you will see below I’m partial to galvanized and black iron) and cut the lengths you need.  I don’t have that.  So I bought various chunks of nipple pipe, with the threads already in them.

First I bought 3/4″ pipe, I bought galvanized and black iron pipe to give it a mixed look.

Here is what I bought:

That was from Lowe’s.

I had to get the cage from Amazon, and it was $10, because I wasn’t about to wait for a month for the cheaper one to arrive.
If you’re like me, and you built it before getting the cage, well you’ll discover the cage is too big to fit around the 3/4″ pipe.  So you’ll need to get something bigger so you can properly attach the cage to the stem of the lamp.  I bought a 3/4″ galvanized union. To be honest, I had had no idea what that was, I was looking at it in the store, it looked like it would offer a big enough size for my project. Here is what I am talking about.

Then of course the bulb.  I bought it from Dollarama and it was $4.

So the 4″ pieces are my supporting legs.  There are two on each side (you can probably use elbow pieces instead, I’ll probably do that in future projects).

1) Screw two 4″ pieces to a tee,
2) do the same for the other tee, but thread the cord through one of the openings.  You have to thread the cord for the bottle lamp while you go because it’s easiest.
3) Screw 5″ to connect the 4″ bases to the main tee.  If you can imagine the main tee is connected via two 5″ pipes which hold the legs.  The central tee will have it’s third hole facing up to the ceiling.
4) screw in a 10″ pipe to the main tee,
5) Install a coupling piece to the top of the 10″ pipe.
6) Install the next 10″ pipe to it.  Make sure you’re threading the cord as you go. If you’ve been threading as you go you should have the cord at the top.  Now it’s time to install the lamp socket.

7)You take the socket, take the cover off and expose the two screws.

Once I crossed that bridge,  I screwed them in.  I reinstalled the cover and screwed in my Edison bulb, I plugged it in and no fuses blew up and I didn’t electrocute myself. Now I just wait for the cage to arrive in the mail. 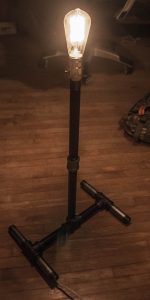 But, no cage as you can see.  I ordered it that night after I built it in the above picture.  I waited a few days for the cage to arrive then I had to unassemble the light bulb socket, unscrewing the wires from the terminals and so on.  As I mentioned above i had to go out and buy a 3/4″ union, because I figured it would be big enough I could screw the cage onto.  and it was, but I only used one piece of the union, the cage fit perfectly on it, a perfect union some would say.  I then reassembled the socket and called it a day.

All in, it’s about a $70 project.  I’m excited it was easy to do, but you can definitely make it cheaper, by using less pipe for the base, salvage an old lamp for it’s cord and socket and buying the cage from China for a couple dollars instead of $10. 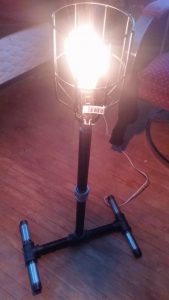 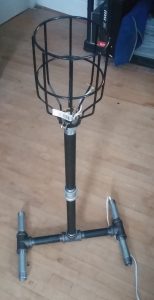 What I didn’t do was paint, to give it the extra charm you could also put paint on it.  I think in the future, I’ll use elbows as legs and I’ll throw an elbow on the top so the bulb curves downwards.  Stay tuned for my next DIY-steam punk adventure.