It’s review time, and I throw myself under the frugal microscope. A new job, more money, but a murky future!

My modern paradigm of frugality comes from being a poor university student, a trope that is as cliche it’s as cheesy as putting a padlock on that one bridge in Paris.  But it’s true, humans are tenacious creatures.  And, will survive with horrid conditions.  It’s with this constant blaring scarcity, that it became easy to adapt new ways, better ways at living in the material world. 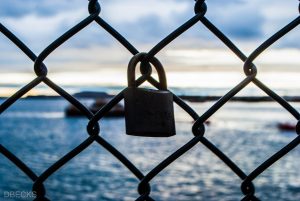 NOT that bridge in Paris.

So 2016 was an interesting year.  Where I earn substantially more than what I did in 2015, I fell partial victim to the life style inflation trope.  Despite having significantly more money than I did, I’d say net happiness is unchanged.  I have traded the feeling of being at the bottom, with an uncertain sharp focus to the future.  That’s careerism, looking forwards.  At my old job, the one I previously characterized as a dip-shit job, I could better live in the moment.  I think I was a lot more adventurous in that era (or is that just stupid nostalgia popping up?).  I have more money, but way less time to do things and my discretionary energy is usually pretty limited now.  As I type these words, it would seem more and more I’ve been encased in a golden straight jacket.   Ultimately: more money, but less time, discretionary time.

More money on the level is typically better.  One of the central themes in frugality is making that dollar stretch more, so I can have more dollars later on.  A constant mindset of scarcity haunts me, like a certain specter haunts Europe.

I believe in having goals that are easy to measure.  It’s one thing to think of frugality in loose-goose terms, its another to put dollar figures on it.  I think frugality is more than just saving money, but it’s usually manifested in the way of saving money. It’s for this reason I’m declaring financial goals to measure frugality. Of course, as a person early in his career, a precarious career, it’s difficult to plan.  But ideally, with a status-quo assumption these are my goals:

My low bar goal is to have $20,000 across my liquid reserve of cash + savings +investments.  It’s a low bar because I’m already more than half-way there. So I’ll introduce  my ambitious goal is to have $30,000 across those levels.  If everything works out like a Disney ending, my ultimate goal is to buy a house.  That is a huge financial burden/decision, so it’s really more like on the very early stages, with no real end-time or real plan in place, but something I’ll exploit if the stars align in a favorable fashion.  Having more than $30,000 at this time next year is something I would enjoy, and I hope to smash that $30,000 goal like Hillary Clinton smashed that glass ceiling.

My plans to help me achieve that goal is saving more money, and I’ll do that by:

Cut down on consumable expenses: This one is a big chunk of the pie.  Buying lunch in an uneconomical manner has contributed to lots of spilled money.  It’s mostly lunch I spend money on. It’s not even eating out a lot, (which I could stand to cut down on). It’s buying EZ lunch options, stuff I can cook in a microwave or toaster oven.  Working 9 hours a day, then coming home tired is not conductive to additional cooking on-top of cooking dinner. It’s easier to stock my work place freezer with cheap junk food.  But it’s an area I identified for improvement.

Spend less time shopping: I wrote a short piece on window shopping.  Unfortunately living in a rural era leaves me with little to do. Exploring new areas, which are rewarding, require more planning and ramp up time, meaning that I’m less likely to spontaneously explore or check out something out, and when I say new areas I typically mean natural areas (trails, etc, AKA free places).  In urban areas, it’s really easy to hop on my bike and just bike endlessly.  But living on a rural highway, which means the speed limit is a nominal 90 km/h road (but defacto 100 km/h) means that I’m basically biking on a freeway with no shoulders, you have to bike in traffic.  If I want to bike somewhere i have to load it in my car and burn gasoline.  Which now means it’s an operation and not a spontaneous adventure.  I find myself going to stores as a destination.  Not good for frugality.

The only solutions to this: move to a more urban area or change my mindset and do more spontaneous things. It’s that easy.

Less spontaneous purchases:  These ones are hard for me to curb stomp because they are low value amounts.  Low dollar items escape my staunch commitment to waiting,  I still have oakflesh resistance when it comes to buying big capital items, but small dollar things?  Sure why not.  I bought a Mortar and Pestle from the dollar store so I could crush up some cinnamon, but it sits here on my desk as a reminder on how infrequent I use it.  Opportunity cost yo.

In short, my savings have been okay, but could use some work.  That is why I have some savings goals for 2017.