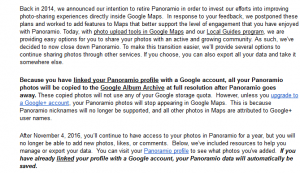 Part of the email I got discussing the end of Panoramio.

A few years ago, Google announced the website Panoramio was going to close.  For those unfamiliar with Panoramio, Panoramio was a photography website that allowed photographers place their photos onto a map.  Google bought the site in 2007 and integrated the photos into Google Earth.   I loved Panoramio when I found it circa 2007/2008.  I was able to see all sorts of unique photos related to places I knew.  I hitched my wagon to that platform and used it to spur my interest in landscape photography.  Things were great, the exposure was pretty good (my Flickr views are no where close to what my poor quality pictures got on Panoramio).  But, as the sun goes down at the end of the day, and the trees eventfully shed their foliage after a long summer:I got the tremendous bad news that Google was yet going to murder another one of it’s products: Panoramio. The old Panoramio photos would be merged into Google Maps.  In some way, Google claims that there is contunity with the old Panoramio and the new Google Maps way of doing things.  The real issue is that Google Maps is driven by POIs.  If you take pictures of McDonalds and the down town park your pictures will show up when users click on those points of interests.

The specialty of Panoramio, seeing pictures displayed on a map, allowed users to see photographs from unique angles, perhaps from an unmarked vista on a piece of public land that otherwise has no POI.  The other victim of this is the Google Earth users (of which I am also) who lost a key tool, the ability to see structures/landscapes from a different angle.  I was able to get key context on all sorts of features on the globe.

I decided I didn’t really want to have anything to do with the new Google Maps version and I went looking for a more general website to share my photographs. At the time, I transitioned to a DSLR and was actually trying to take decent photographs. Flickr seemed to fit the bill.  Huge community, generous storage allotments, not too difficult to set up.  Say unlike Instagram, where you need a Rube Goldberg machine to transfer pictures from your computer to your phone to ultimately Instagram.

But….
That feeling I got when I heard Panoramio was closing was experienced again when I had the same feeling a few months ago, when the new owners of Flickr (Smug Mug) announced that they were changing the offerings provided by free accounts on Flickr.  Historically, Flickr (from what I have read anyways) has been a mess.  Lots of resources went into the site, and great incentives were in place.  Basically an unprecedented amount of storage was giving to free users (1TB).  But many old stock users complained that the community never really found it’s way.  As someone coming in at the end I never got to appreciate the complaints, I only hear stories like the old timers at the bar talking about the glory days of the old mill.   But the new owners now have decided to curtail the generous storage of 1 TB to a mere 1,000 photos for free accounts. Not only will this be a huge blow to amateur hobbyist photographers out there and could easily stratify free users with limited storage vs pro users.   Free accounts with over 1,000 photographs will have every photograph over the 1,000 limit deleted, potentially 404’in all sorts of links in old forum posts and internet articles.

I don’t make a single cent off my photos.  Nothing, nada.  And before I start blowing cash to be part of a glorified social club, there are bigger and better things to get, like maybe a lens that isn’t my kit lens.  Or tripod that can actual take level photos.  As a true passionate hobbyist, I don’t have the desire, the means, or the appetite to spend the money.  I only have 608 pictures on Flickr, but this basically curtails my future outlook significantly.  This will also have the effect on other people like myself, who will discontinue using the service.  As much as I have respect for the great photographers, I also like to stick to my own group of perennial hobbyists.  I’m not sure if this will result in mass-deletions (probably not) but long term, I am doubtful many of the established hobbyist who are nearing or have broken the 1,000 photo count will continue using the site.

I get SmugMug’s predicament.  Giving everyone 1 TB is a huge expense.  But at the same time cutting it back to only 1,000 pictures is a huge claw back.

The unlimited storage is nice for a pro account, but is it really worth it?  Does the service let users upload RAW files?  If not, then it’s not as useful. Other services, like Google Photos allow you to upload a large sum of pictures (even unlimited if you agree to downgrade the quality).  The storage space is a competitive one, and if I ever spend money on network storage, I would want to pay one where I can back up everything and not just photos.