My 8 readers, welcome to a Frugal Nexus rant.

Today, upon the freezing rain and gusty winds I braved a drive to go to Best Buy.  I wish I could yell “Jokes!” right now, but I can’t because this really happened.  We’ve been hearing it for years, retail brick and mortar is being eroded like a Brazilian coast line, and my experience illustrates why.   I needed a DVI cable for a monitor, for work of course.  Pretty simple mission, as easy as missions go.  I navigate the bright store with it’s wide aisles and find the cable section.

Holy shit, there are a lot of cables, almost all of them HDMI or VGA.  Then I snipe it, a DVI cable, the only one I can see.  I’m expecting to pay a little bit more than internet prices, but the price was so astonishingly high that I had to check about three times.  Guess how much this Insignia 1.8 meter DVI cable was? Come on just guess, 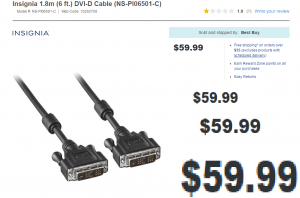 What god damn whacky tobacky world do I live in?  It’s not even a Monster cable for fuck’s sake.  I’d expect that mark-up behavior form Monster Cable, but god damn Insignia?  The damn house brand for Best Buy.  I always assumed that was supposed to be the Great Value of Best Buy, but holy shit, $60?  You can get like 6 DVI cables on Amazon for the price of one of these damn stupid Best Buy Cables.

So anyway, I’m obviously not obligated to buy that cable. So I walked out, while trying not to pass out from the bafflement.

I walked over to Staples.  FYI, Staples puts their cables in the most bizarre spot, not next to the monitors but with printers. I had to actually get a staff member to show me where they were.  He told me they had a few kicking around on clearance too, good thing because the damn thing was $49 at Staples.  The clearance one was about $15, It’s a work expense so ultimately I don’t pay for it.  But even though in theory I’m not spending my own money, I’m not letting my work get ripped off by god damn outright scams.

Here’s the thing, many people have noted that HDMI cables sold at places like Best Buy are rip-offs.  They are,  you can literally buy a HDMI cable at Dollarama.  And here’s the secret sauce, they are ALL THE SAME.  By virtue of being a digital transmission cable, it works or it doesn’t.  There is no nuance, the zeros and ones get transmitted to your screen, or they don’t.

It’s so damn simple.  Don’t be a sucker.  I’ve known suckers.  I knew one person who bought a PS3 and was so damn insistent that the $60 gold plated HDMI was better, I asked her why, “it’s just better”. NOPE not in a million years, my dollar store one functions EXACTLY the same as the god damn gucci one.    So my eight readers.  If you ever need a cable, a HDMI, VGA, DVI, audio cable, whatever.  Please, don’t make me rant again, buy one online (or the dollar store) and save yourself lots of money.

And if you think I’m just making shit up, just read these few articles,