On July 6th, I published an article about Key Resellers.

As part of that article I wanted to actually participate in the market to see what it’s like, to get a better understanding. Unfortunately, that did not make into the original cut, so I’m pushing an update. As a quick update to any of my eight readers on what happened last article, I looked at Key Resellers. A so called “grey-market” where people resell license keys for digital software. These keys are typically sold at deep discounts vis-à-vis what the conventional distribution lines are selling the product at. I wrote I was unsure, how I felt about the markets writ large. A deep sense of ambivalence, while I think they help let consumers get a upper-hand in a world of digital trade where developers largely have the upper hand (not withstanding things like piracy). It helps people short-circuit ridiculous region pricing, recall Adobe’s naked greed in pricing their products at extortionate levels in Australia, assumedly because it cost so much more to ship your zeros and ones across the ocean, like conventional goods, right? But the source of these keys are always questioned, and developers have and in the past blocked and revoked keys, making you at risk at being out of luck.
None the less, I decided to purchase a key for something that most people will think of as useless and banal: Microsoft Office 2016. G2A, one of the largest (if not the largest) of these key-resellers does not sell Office 2016. So, I went to the guy down the virtual street: Kinguin. I wrote about both of these websites in my previous article if you wanted to get a quick sense of these players.

As far as web design goes, Kinguin is a modern site. So, I really have no comments on that. Finding the software was easy enough with a search. Specific to Office, is the decision I had to face in regards to which version to get. The 2016 Home and Student, or the Microsoft Office 2016 Home and Business Key. According to the Microsoft website, the business package just adds Microsoft Outlook. Which is a fine way to manage your mail, but I’ve grown accustomed to Mozilla Thunderbird. So, Home and student it was.

So, it’s no surprise that you have to make an account on Kinguin. I created an account, then validated it. Then I filled my cart. The first big hiccup is the Kinguin buyer protection. I read their article on it, and I’m still unclear on what it does. It supposedly gives the following benefits:

So, to fully understand the scope, you can always relay on good hard legalese of the terms of service posted on their site. Chances are you hate reading the terms of services, so I’ll read it for you and pick out the good stuff, but the section regarding buyer protection is pretty slim, it is spelled out in section 11.

“Buyers and sellers let Kinguin.net take, at its discretion, final decisions regarding all claims that buyers may file with Kinguin.net in connection with Kinguin Buyer Protection Policy.”

If Kinguin finds in favor of the buyer, the buyer gets their money back and the seller has to reimburse Kinguin the transaction fees. The buyer will have to cough up evidence of a deficiency however.

That’s the meat of it. So, it does seem to provide some protection, but it’s not outlined very well. A quick search on Google shows some very unhappy customers, who felt like the Buyer Protection, did not protect them.

If you go to remove the buy protection from your cart you get a spooky “you will not be protected” type of warning. I purchased the buyer protection, thus if something went sideways during the activation I would get to experience the embrace of customer service. Of course, this was an additional $7. It’s easy to think, if you’re saving over $100 that an extra $7 is worth it, but I’m still not sure how useful it is.

Anyways, I thought the prices being displayed were Canadian dollars, so once I got to the payment phase, I discovered the price magically inflated a little bit – okay, same deal with the extra $7, just a little bit more. You can see this in the screen shot I attached, the original price listed was $12.99 but the cart price was $16.66, no biggie really, this happens all the time as a Canadian in the world of internet commerce. 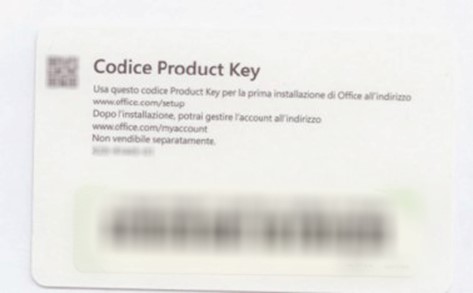 So, I did it. I used two middle men: Visa and Paypal. Ultimately, this is a knee-jerk reaction because I am cautious around a site like this. The payment process was the same as any other site, so I’ll skip that.

I got an email confirming the order. Then I waited for the key.

Shortly after I got the key in an email, it was a picture of the product key and the instructions in the picture were in Italian. Very interesting I thought. You can see a redacted picture of the key I got. It makes you wonder how a retail key, presumably from Italy ended up in my hands. A tale about the globalized world.

In the old days, you would have the software then activate it when you go to install it, but because it is Microsoft there is an additional step you have to do on your account settings in the browser. So, I signed into my Microsoft account and activated the product. It was pretty exciting to see it actually work. After the activation on the website it lets you download the software to your computer. Okay sweet.

So, I went made a cup of tea, watched the lazy afternoon sun and came back when it was done downloaded. So, I opened up Word, the most common tool I use of the Office suite. I’m prompted to sign in again and then it wants the key again.

Shit, I thought. Okay, standard operating procedure. So, I input the key and all of sudden Microsoft is acting like it has never seen that key before.

Double Shit I thought. It didn’t even say invalid, it just straight up said it might be for a different product. So, I start getting a little sweaty, and I double check my subscription on the Microsoft website, yup it’s for this product. So, I go back into Word and I just “X” out the screen. Then some other shit popped up, about automatic updating. Then I X’ed out of that. Then I got the “This is a 30-day trail” screen. Damn it.

But there was a link for authenticating the software. So, I said sweet. This was the boss battle. I could do a conventional web authentication, which if I was able to authenticate initially, doing this should work no problem. Or I could try that sketchy phone automation way. So, I looked at my cellphone, and I dialed the number.

A chipper virtual customer support answered my phone and I went through the prompts. It was annoying because you had to actually physically say “yes” or “No”, you couldn’t just press “1” or “2”, and virtual Jim couldn’t always understand me. So Jim figures, that I am calling from a smart phone and he gives me an out: he can send me a link via SMS and I can complete the activation on a website on my phone. Okay whatever Jim, send me the link. So he did, but I wasn’t sure if I wanted to do it that way, so I let him hold on the line while I opened up the link in Firefox. I guess Jim is smart enough to know that I clicked on the link and hung up me, gee thanks Jim.
So for this authentication you have to type in what seemed like a thousand digit code from prompt inside Microsoft office. The website authenticates that and spits out another code you input into Office. And, I gotta thank virtual Jim, because typing that number into the phone dialer would’ve been a nightmare (or saying the code for that matter). Worse yet, Jim reading back the code to me to input into Office would’ve been a nightmare as well. I clicked the submit button and it starting cooking, and Microsoft Office was okay with it. The software was authenticated!

As of yet, no problems what so ever. I’m still not sure where I land on this whole thing. But it seems to provide an interesting alternative than just placating the developers by using just the “official” channels. I’ll be sure to update if something goes sketchy with the licensing.

Until next time, stay frugal.